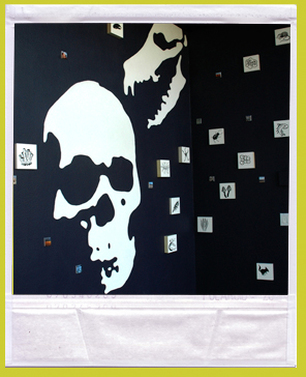 Lucy, Darwin, and Me

"Lucy, Darwin and Me was an extremely well designed, multi-layered, and engaging show that took over the Art Produce Gallery from December 12th, 2009 to January 24th, 2010. On January 9th, the artist, Michele Guieu, gave an informal talk and explained the show, her impetus for creating the work, and some of her relevant background -- like the fact that her father is a geologist, her mother is a biologist, and her family lived, for a while, in Africa.

The overall design of the show was flawless. As a former professional graphic designer, Michele Guieu utilized her knowledge of layout, craft, and presentation to shape the bizarre physical space of the Art Produce Gallery (a large storefront with a small back room) into an exceptional exhibition. In a statement on the piece, Guieu described the show as having a “museum-like ambience,” and although the show demonstrated qualities of a more permanent, natural-history museum show, there was something much deeper, personal, and intense that occurred in this work. It was the opposite of most gallery exhibitions in which a series of objects are relocated to any space for a given duration where they will hopefully be sold. This show was specifically created for this space and the multiple audiences that came in contact with the work. Also the work was essentially destroyed when the show ended. The major hub of the piece, the mural, was painted over and only pieces were salvaged.

Guieu herself commented that she found it somehow pleasing to create a piece of art which was so impermanent. In fact the 3 dimensional collage of sound, visual and intellectual stimuli offered by Lucy, Darwin and Me was very successful, and although the run has now ended in San Diego, I hope that she will continue to work with the ideas and bring them to life again somewhere else. This was a particularly intriguing and generous use of mixed media that invited the visitor into a complex dialogue across several cultures and vast tracts of geological and evolutionary time. Exceptionally engaging." - Katherine Sweetman Learn more at www.micheleguieu.com. 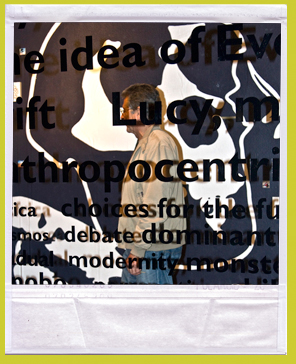 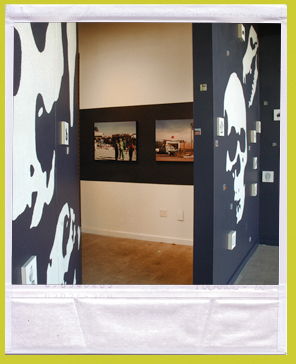 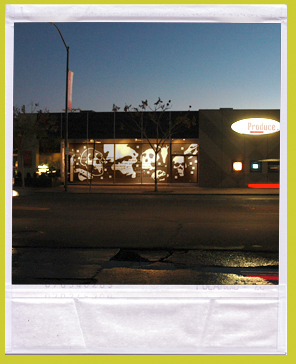 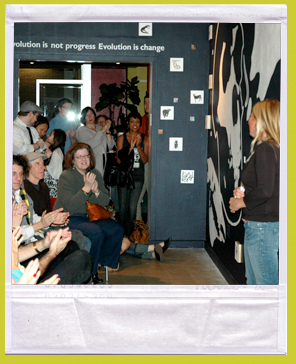