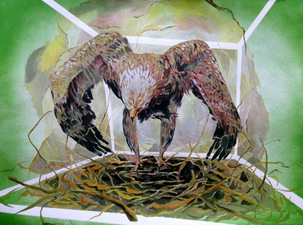 Art Produce is pleased to present “Chula Vistan,” mixed media paintings by Anna Stump, in which the artist explores her relationship to her hometown and the Mexican/American Border region. Stump grew up in Chula Vista and has raised her own children in the South Bay. She has a complex relationship to Border culture, a jangling mixture of jealousy, admiration, and otherness. She was raised to both fear Tijuana and honor Mexican culture, pale in her own Mid-Western, Protestant roots.

Stump uses imagery of piñatas, marble busts, drones, and golden eagles to represent the envy, unease, and irony of Border living. She will host a “Think Tank” in the gallery to discuss ideas of culture in the South Bay.

In this World, but Not of It:
Art by Anna Stump

Anna Stump comments on border life in playful, wry, and sometimes, subversive ways. Mexican culture features prominently in her art, for which she credits a lifelong admiration of Mexico’s lively, colorful, and persistent traditions. As a kid, she envied her Mexican friends and was enamored of the celebratory nature of Mexican culture. She loved the bright colors of its folk art, danced to cumbia and mariachi music, ate bolillos instead of Wonder Bread, and relished her family daytrips to Tecate. By comparison, her Protestant lineage, with Midwest and Puritan roots, seemed bland and boring growing up as a white girl in Chula Vista.

Raised along the U.S.-Mexico border, Anna Stump has experienced the interconnectedness of these two nations for a lifetime. In her art, she explores weighty issues of identity, ritual, class, autonomy, and power, but often with a light touch. A local artist with intentions of honoring Mexican culture, this güera grapples with a fundamental question: “Is it okay to make work about a culture that you grew up in, but that is not your own?”

Piñata Triptych hangs as a banner of welcome to this exhibit. In it, we see a crown piñata from three angles, swinging from its tether, long streamers blowing in the wind. Movement is heightened through an expressive use of color and brushstrokes, and drips of paint run down the surface like melting popsicles. The painting has a smooth, high-gloss finish, hard and shiny, likecartoneria, Mexican papier-mâché. It takes a lot of whacks to break a piñata, a challenge complicated by a blindfold and a trickster, who hoists the piñata or lets out slack in the rope. Ms. Stump omits the players and the stick, leaving these details to the viewer’s imagination. She goads us into thinking about the forceful, and as she says, violent, nature of cracking open a piñata.

The paradoxes of roughhousing and violence, innocence and maturity, continue in the nearby work, Piñata Studies. These are no simple cut-and-paste collages. Ms. Stump starts by photographing piñatas while standing underneath them and looking up. She translates her photographs into gouache illustrations that are then layered with print media. Juxtapositions emerge intuitively at first; as compositions develop, she becomes more critical of the match-ups. Emblems of innocence, ubiquitous at birthday parties and celebrations, are set against adult arenas. Colorful children’s toys float across newsprint. Deputy Dog collides with a sexy beauty contestant. A kewpie doll in a hula skirt heats up the mayoral race between Carl DeMaio and Bob Filner. A dinosaur roars as drug traffickers stand handcuffed in police custody. These, and the other ephemera collages in the show, may appear light and fragile, but the themes are anything but.

Home Depot Underground, a gritty triptych, highlights Stump’s commitment to process, her collaborative strengths, and her chops as an artist. It is piece developed during a sponsored artist-competition by (T)here Magazine, in 2010. At eight o’clock in the evening, she and her collaborator, Ippolita Rostagno, drew a slip of paper out of hat. Their challenge: twenty-four hours to make an art piece informed by this random prompt, “Underground.” Stump and Rostagno photographed day laborers in the early morning hours, under the 5 Freeway in Los Angeles. Stump translated her photographs into an energetically painted acrylic triptych. Dark figures stand in the shadows below the freeway or sit patiently on the curb outside a home improvement store. The men, likely in the U.S. illegally, are as anonymous in Stump’s painting as they are to those who hire them, without papers, without e-Verify, without the protections of the Department of Labor. Painted quickly, brushstrokes visible, paint dripping, the piece emphasizes an instability and transience. In the left and middle panel, heaviness is suggested by dark concrete, shaded ground, and trees. Accents of bright orange run through the triptych, and the right panel, with its lighter, brighter, and more open composition, holds promise of finding work, the orange sign a new symbol for the American dream.

Anna Stump’s oeuvre encourages thought about issues significant in politics today: U.S.-Mexico relations, immigration, border security, class disparities, and cultural tolerance. She may feel tentative about her position—as defined by any number of identify markers—to comment on Mexican culture. It is left to each individual to pass judgment. This viewer, for one, finds her work thought-provoking, relevant, and a catalyst for important conversations.