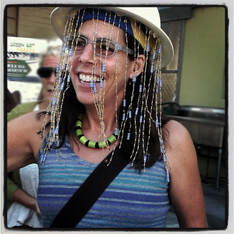 An advocate for increased access to arts and culture, Lynn works locally to develop educational, social and environmental resources for youth and families. Engaging youth and adults in the process of creative problem-solving, she teaches classes and workshops throughout the county in schools, cultural centers and at her Stone Paper Scissors studio. She has been a California Arts Council, Artist in Residence, and is an arts education consultant for UCSD’s Education Studies Department and the San Diego Unified School District.

Lynn’s public art commissions range from the design of educational playgrounds and school campuses to sculptural video installations. She has exhibited her work at the Athenaeum Arts and Music Library, City Gallery at San Diego City College, Mesa College Art Gallery and was selected the State Assembly District 39 representative for the “California Contemporary Artists 2007” exhibit at the State Capitol in Sacramento. Some of her community engagement work at Art Produce was featured in 2012 issue of Public Art Review, "Food For Thought".

Lynn co-authored a resource book for teachers, “Object Lessons, Teaching Math Through Visual Art”, and "Community Development in the Context of Art: North Park and the Citizen Artist" for CultureWork Broadside documenting her history of community activism and the development of Art Produce.  Check out Lynn's interview with Monkeywrench which was broadcast on January 16, 2018 where she discusses artists in communities and being a Citizen Artist.  Monkeywrench is a radio program aired on KUCI 88.9 FM in Irvine, UC Irvine's independent, underground radio station. CLICK HERE to listen.  To see Lynn's newest public project, You Are Home, CLICK HERE.
​ 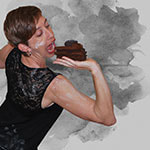 ​Nikki Dunnan is a dancer, teacher, and administrator. Nikki co-founded Eveoke Dance Theatre in 1994 as one of 8 original Concert Company dancers under the direction of Founding Artistic Director, Gina Angelique. She was featured in 32+ original dance theatre works (month-long runs) in her 18-year career with the Company. She became the Administrative Director of Eveoke in 2000 and ran the organization as Executive Director from 2007-2012. Since her departure from Eveoke in 2012, Nikki has worked as a bookkeeping and administrative consultant for several small businesses. She is also a guest artist at Canyon Crest Academy, teaching in the day classes and occasionally working with the conservatory dance program. Nikki has a degree in Psychology from the University of California, San Diego.

​Nikki stepped into the Administrative Director role of Art Produce in February 2016 and is committed to the continued expansion of the organization’s programming and community impact.

Art Produce Board of Directors

Felicia Douglis is President of FRD Solutions, LLC, a firm that provides organizational and workforce performance strategies and solutions for clients using a combination of predictive analytics, design thinking, and technology. Her professional experience includes designing and delivering learning transformation initiatives, and execution of large-scale training programs for clients across a variety of industries, including Federal agencies, US Navy, and commercial organizations. Felicia holds a B.A. in Studio Arts, an M.Ed in Educational Technology, and will complete her M.S. in Predictive Analytics from Northwestern University in June 2018.

Carrie is the owner of See Spot Sit, a pet sitting and dog walking company that has served San Diego since 2000. She has a degree from San Diego State University in liberal studies and child development.

Sofia V. Gonzalez is a Northern California native currently living and working in San Diego, California. Raised in Marin County, California, Sofia is inspired by her natural surroundings and uses processes of sewing, staining, and color to explore her sense of place. Sofia received her MFA at California College of the Arts in San Francisco in 2014 where she focused on furthering her skills in textiles and natural dye techniques. Her work has been exhibited throughout the United States including California, Illinois, Arkansas, Texas, Missouri, and Oklahoma. Since 2014, Sofia has taught community natural dye workshops which allow the public to learn how to make dye from waste materials and local plants. She is passionate about creating a sense of community and environmental appreciation through visual arts and textiles.​

Richard Keely is an artist and educator from Southern California. Originally trained as a painter, Keely’s work during the last twenty years has turned towards sculpture, photography and installation. With the sculptural work Keely is often concerned with transforming ordinary objects into visually dense wall pieces that have the potential to evoke an array of experiential possibilities. Richard has exhibited his work and given lectures at several well-known Universities and has been a “Visiting Artist” at Murray State University, Oberlin College and Montana State University. Currently Richard Keely is living in San Diego, CA. and is an Associate Professor of Art at San Diego State University, where he teaches sculpture for the School of Art and Design.
​
Bhavna Mehta

Bhavna Mehta works with paper – cutting and embroidering it to tell stories. Mehta has exhibited widely in San Diego and Southern California. She is the recipient of the Artists In Communities grant from the California Arts Council (2017, 2019) in partnership with Art Produce and the Creative Catalyst grant from The San Diego Foundation (2015) with Oceanside Museum of Art. She has won multiple awards in juried shows and she was one of the San Diego Art Prize emerging artist winners.
​
Nassem Navab

Nassem Navab is an interdisciplinary artist from Southern California. Informed by her Iranian-American identity, Navab critically engages with a wide array of issues from cultural displacement to self-expression and identity. She works in various mediums from 3D modeling, video, sound, and sculpture. She completed her MFA at the University of Arizona in 2019. Navab has shown work at various galleries and museums including MOCA San Diego, Visual Art Center (Austin, TX), MOCA Tucson, and San Diego International Airport.
​
Arzu Ozkal

ARZU OZKAL is a Turkish born, San Diego, California based artist, designer, and researcher whose work focuses on design’s role in looking for forms of creative and critical outcomes through participation and collaboration. She is interim director and associate professor of design at the School of Art and Design at San Diego State University.  Ozkal is a founding member of Home Affairs, an interdisciplinary art collective focusing on creative projects about a range of issues impacting women's lives. She is also on the board of A Reason to Survive (ARTS), a National City-based non-profit art center dedicated to providing high-quality arts programming to South Bay youth.
​
Molly Puryear - President

Molly is the Executive Director of Malashock Dance and brings experience in program management, development, and administration to her position. As Education Director from 2009 – 2014, she was responsible for all aspects of the School and in-reach/outreach programs. She has strategically aligned specific synergies between the artistic and educational pillars in order to create a holistic approach to the relationship between MD’s programs, the community it serves, and its funders. A modern dancer and instructor with training in various dance genres, Molly demonstrates uncompromising dedication to both students and the art form of dance. Molly is an active member of several arts education advocacy groups, and continues to give back to the arts community through service on the Steering Committee for San Diego Dance Connect from 2014-2016, as a member of the Advisory Board for A Step Beyond and the Board of Directors for Art Produce.