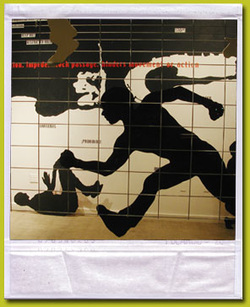 This diverse group of young artists came together through their common association with public artist, Lynn Susholtz of Stone Paper Scissors. Some have been working together since meeting in an after-school art class when in junior high school 8 years ago. Several have since gone away to college, returned as teaching assistants, studio interns, and collaborators in many arts projects. We all have helped in the free after-school art classes that Lynn teaches at the North Park Recreation Center. For the past few summers Lynn has engaged young artists in an “open studio” here at Stone Paper Scissors and encouraged both individual and collaborative projects that explore a variety of media, techniques, and conceptual approaches to looking at our environment. This summer 3 college and 3 high school students began to meet and share ideas, stories and thoughts about our environment, our collective notions of the future and the issues that we often confront living in this region. Our discussions took us in a myriad of directions and as each member signed on to the project, their contributions took us down another path. We knew our focus would be on the city and the urban environment. We also considered the immediate environment of North Park as inspiration. What we found was that the process provided an opportunity to reflect on our experiences and allowed us to express a perspective not often visible in society. Read their biographies below.

April Tra is a dancer who grew up in San Diego as a second generation Vietnamese-American. She has been an active member of the Eveoke Dance Theatre for many years. April is one of the many celebrated and critically acclaimed dancers in Eveoke’s thought provoking performances, and teaches Hip-Hop dance at their downtown studio. After graduating from San Diego High School in 2002, April moved on to the University of California Irvine, where she currently studies dance and liberal arts.

Ariana Barry is a White/Filipino-American from San Francisco. She works part-time at Caffé Forte and spends much of her free time making art. Ariana attends San Diego State University where she is majoring in Communications with an emphasis in advertising. She studies communications and political science while taking a number of arts courses. One of her aspirations is to work in graphic design, perhaps even pursue a Masters’ degree in that field.

Ramón García is a graduate of Hoover High School. He is a talented young artist who has lived in North Park for some time. He met the other artists while participating in the North Park Street Fair and volunteering in the after-school art classes at the North Park Recreation center. Ramón prefers drawing and sculpture as his media of choice. His art centers on contemporary urban Mexican-American imagery and icons of urban culture.

Eliza Mason is from San Diego. She has been an invaluable assistant to Lynn in the after-school art classes since September. Eliza is a senior at San Diego High School in the International Bachalaureate program. Her work relates to her music interests, her bi-racial Anglo/Chinese cultural identity and society’s many perceptions of beauty. She has exhibited her drawings in Caffé Forte and creates work in the style of “magical realism”.

Nallely Lopez is a first generation Mexican-American artist. She attends San Diego High School as a senior in the International Bachalaureate program. She found the artist within her after meeting the Stone Paper Scissors family. Her current passion is taking Kung Fu classes. In addition to this installation, Nallely assists Lynn and other artists with after-school arts classes at the North Park Recreation Center.

Vicente Quiroga Jr. is a Mexican/Italian-American visual artist who grew up in North Park. Having graduated from San Diego High School in 2001 he went to New York for college. Vicente is a junior in the Gallatin School of Individualized Study at New York University. He has been working and collaborating with public artist Lynn Susholtz for eight years. He has worked at several architectural firms and volunteered for non-profit galleries and children’s art programs while studying architecture, urban design and public art at school. He currently is an intern with Robbins Jorgen Christopher Architects. 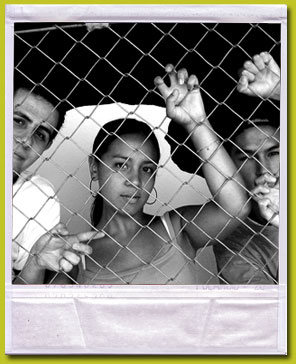 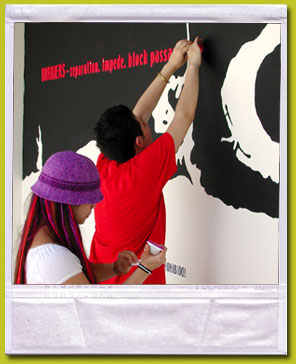 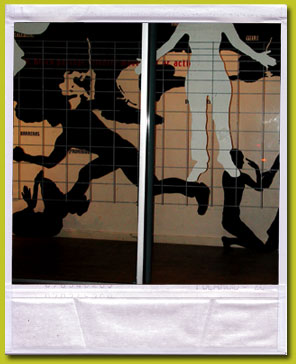 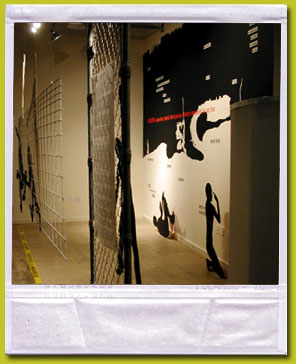 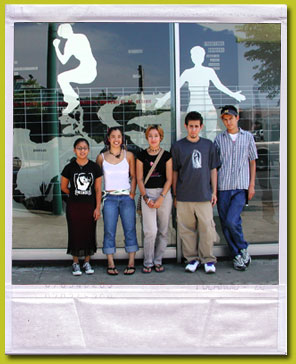