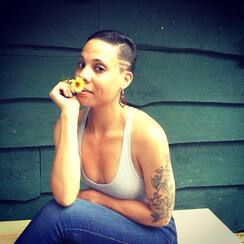 About the Artist:
Cara Hagan is an interdisciplinary artist whose practice is informed by movement, words, digital space, contemplative practice, and community. Ms. Hagan has the pleasure of sharing her artistic pursuits across the United States and abroad. Most recently, Cara has set choreographic works on students at the UNC School of the Arts, Roehampton University in London, Gonzaga University, and on professional dancers at the Dance Barn Festival in Battle Lake, MN. Her recent guest residencies have included Thirak India in Jaipur, India, Roehpampton University in London, James Madison University, and at UC Boulder, where she was a guest artist as part of the 2017 U.N. {W.R.A.P} Series. Further, Cara has made recent performance appearances at the Performática Festival in Puebla, Mexico, at Three House Arts in Durham through the Durham Independent Dance Artists, the Asheville WordFest, the On Site/In Sight Dance Festival, and the Scottish Conference on Geopoetics in Edinburgh.  Cara presents her research regularly at universities, festivals and conferences around the world. A regular presenter at the National Women's Studies Association annual conference, she served as co-Chair for the Women of Color Leadership Project pre-conference sessions from 2016-2018. Her work on screendance has most recently been presented at the Loikka Dance Film Festival/Future Screens of Dance Conference in Helsinki, Finland, at DeMontfort University in Leicester, UK, and at the University of Wisconsin, Madison. A recipient of several awards, Cara's film Sound and Sole was awarded the "Best Southern States Documentary" at the 2018 Southern States Indie Fan Film Fest. She was most recently honored by the Governor of North Carolina and the NC African American Heritage Commission for her work as an African American artist in North Carolina and beyond. Other awards include a 2014-2015 NCAC Choreographic Fellowship Award, a 2015 Sustainability in the Arts Grant and a 2015-2016 University Research Council Grant. Ms. Hagan serves on the dance studies faculty at Appalachian State University, as well as serving as director and curator for ADF's Movies By Movers, an annual, international dance film festival under the auspices of the American Dance Festival. Cara's scholarly and creative work can be found in various publications, including the Snapdragon Journal of Art and Healing, Collective terrain, Quill and Parchment, Headwaters Journal of Expressive Arts, the International Journal of Screendance, and in the book, Dance's Duet with the Camera: Motion Pictures, edited by Telory D. Arendell and Ruth Barnes. Currently Cara is under contract to complete her first solo authored book through McFarland Publishing. ​
© 1990 Lynn Susholtz. All rights reserved. Login.