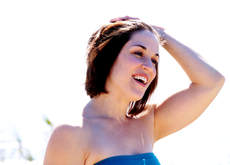 ​About the artist:
​
Erica Buechner has had an extensive, professional dance career in San Diego. She has performed for many established companies, including Mojalet Dance Collective, Eveoke Dance Theatre, IMAGOmoves, Wallpaper Performance Group, The PGK Project, Patricia Sandback and Dancers, Joe Alter Dance Group, among others. In the past seven years, Erica has shifted her focus from performing, to choreographing and producing. Since 2011 she has co-produced youTurn Arts, an annual arts event, that has featured several local visual artists and musicians. She has choreographed four of the seven years, including her first evening length work, The Dying Swan: Revisited/Re-envisioned in 2016. youTurn Arts has brought in guest artists Tamara Saari from NYC, vîv from San Francisco, Mark Haim from Seattle, and Jesse Zaritt from NYC. In spring 2017, Erica was invited to create a new evening length work, SHE, for the Live Arts Fest, produced by San Diego Dance Theater. Erica was also invited to co-create Feast On This! Dinner Dances at Art Produce. After going back to school in 2012 to receive her MFA in Dance from Hollins University, Erica has been refining her aesthetic with more clarity. Recurring areas of exploration in Erica’s work include creating a visual atmosphere; bringing the audience through a variety of emotions, often including humor and intrigue; and using multiple mediums. She is notorious for saying “this might be a bad idea” while in the creative process, but it’s because she understands that through risk and curiosity, great art can emerge.
© 1990 Lynn Susholtz. All rights reserved. Login.