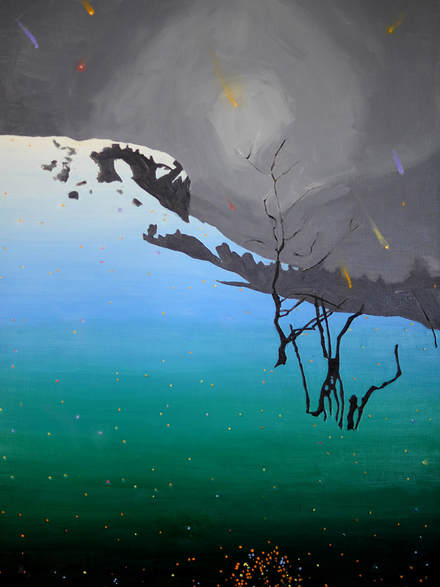 ​The work presented in “Embers of Life” is the result of an extensive collaboration between a painter (Reasor) and a microbial ecologist/experimental musician (Lipson). In 2016, Reasor and Lipson were awarded an Ars Bioarctica art-science residency by the Finnish Bioart Society at the Kilpisjärvi Biological Station (operated by the University of Helsinki) in the Finnish Arctic. They spent two weeks there, the first in winter and the second in early summer. During the residency, Lipson collected snow samples for analysis and recorded ambient sounds in the environment, while Reasor made sketches on location and took photographs for later use in developing a series of oil paintings about the visible and invisible characteristics of the local landscape, which consisted of lakes, fells, rivers, and forest. The heart of the project is a series of paired paintings which express the landscape on a macro and micro scale.

Kim Reasor is known for documenting the manmade landscape via representational oil paintings. She became particularly intrigued by the tightly interwoven quality of nature and development in Southern California after moving to San Diego. She has also produced work examining the inhumanly scaled industrial landscapes of Long Beach and Vernon. In 2016, Reasor and her husband spent several months in Finland. This experience, which included an art-science residency in the Arctic, gave her a new perspective of deeply appreciating nature and urgently fearing for it. The Ars Bioarctica residency allowed her to explore this theme, as well as challenging her to create data visualizations that also work as aesthetic art objects in their own right. Reasor has shown in galleries and museums in the United States and Europe. One of her paintings was recently accepted into the permanent collection of the San Diego Museum of Art.

David Lipson is a professor in the Department of Biology at San Diego State University. He specializes in the microbiology of cold ecosystems and how these communities interact with climate change and global cycles of carbon and other elements. Dr. Lipson received his Ph.D. in 1998 from the University of Colorado and joined the faculty of SDSU in 2001. He has published over 50 articles in peer-reviewed scientific publications as well as several book chapters. Dr. Lipson also has a longstanding interest in music, having studied music theory and microtonal music in the 1980’s. More recently, he has performed at the San Diego Experimental Guitar Festival and engaged in various science-art/music collaborations with San Diego artists, including the creation of several interactive musical sculptures and non-traditional musical instruments.