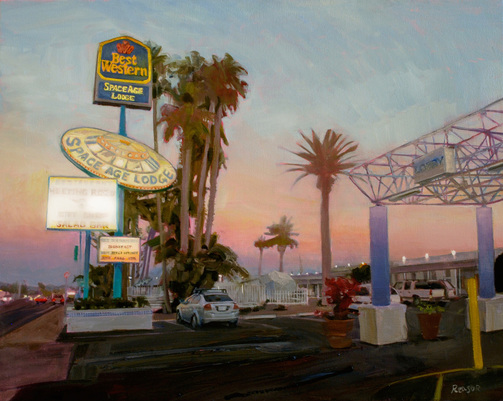 Kim Reasor is one of the most admired realist painters working in Southern California. Her brilliantly lit landscapes celebrate the beauty of the ordinary and show her precise understanding of the way skillfully manipulated paint can convey what the brain can barely understand.

Over the last several years Kim Reasor’s work has been included in five local museum exhibitions including 2013’s landmark Nature Improved, presented simultaneously at The Oceanside Museum as well as The San Diego History Center.

"One of the perennially engaging things about visual artists is that they will see things in ordinary surroundings that others overlook. Kim Reasor looks at one of San Diego's main freeway interchanges and thinks about 12th-century architecture. "
Offbeat Landscapes Come To Life, Robert L. Pincus San Diego Union Tribune July 15, 2007