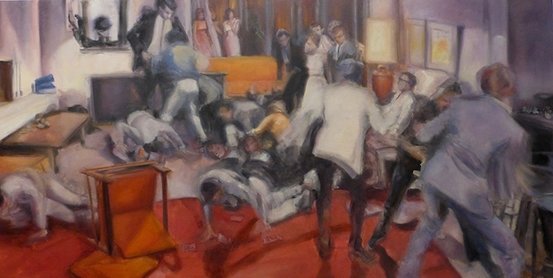 Gallery Hours: 11am-6pm Daily
Entry through Tostadas or by Appointment

Calling on vintage stereotypes of vixens and renegades, the subjects stand in for the inequitable head butting of us versus them. Their mythical existence lingers in fleeting and fuzzy moments of endearment and intuition. Weirdly nostalgic, usurped scenarios are rearranged to bring up glimpses of the forbidden and forgotten.

​The paintings often pair up as sequences in time, but more obscurely as alternative outcomes that question objective and subjective experience. For me, it is like falling asleep with the television on and not being able to distinguish the dimension of sleep from the world of fiction. Without forethought, the work serves as an out of body autobiography. Initial associations are more about personal history through the flashes of buried moments and the realization that the earth is always spinning."

Leslie Nemour is a native of San Diego and has been working as a visual artist and art professor since she received her MFA from UC San Diego in 1981. While there, she discovered the common DNA between cinema and painting, and learned to talk about film as painting and painting as film. As a studio artist, her influences and inspirations are globally intertwined with her Southern Californian upbringing. Imagery is adapted from references in popular culture but specifically from film and television. She connects eras of television history with memories and is transfixed by its eclectic and random nature. In 1993 after years of teaching part time at almost every college in San Diego, she landed a full time academic position at MiraCosta College where she continues to teach painting and drawing. She maintains a studio at her home in San Diego, travels when possible, photographs everything and paints often.

"I am interested in the transition and translation from real life action, to film, to television, to digital photography, to drawing and then to painting; electronic media moving in a de-evolutionary pattern into the traditional medium of oil paint." ​
© 1990 Lynn Susholtz. All rights reserved. Login.