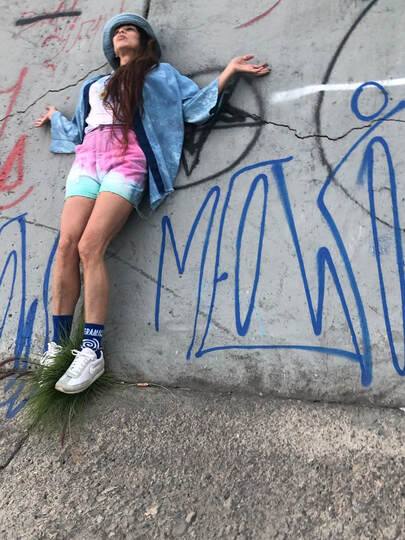 “My work.” says artist Tessie Salcido Whitmore, “is about identity, hidden and discovered.” Influenced by popular culture, art history, and mysticism, Salcido Whitmore takes cultural perceptions of gender identity as one of her primary interests. Created out of mass-produced objects, her past work has investigated the Aztec goddess of women’s sexuality and Venus figures.

For I Rang A Silent Bell, Salcido Whitmore amassed ceramic cat figurines from flea markets and thrift stores. Arranged in a field across the gallery floor, they suggest the cultural trope of the “cat lady.” This term refers to a middle age or elderly woman, single and sexless, living with numerous felines. At its most dramatic, the figure conjures images of an unkempt woman in her bathrobe, rarely leaving the house. The history of the figure has changed over time. Its origins lie in the Middle Ages, when it was associated with witches and signified evil, sin, and manipulative female sexuality. It was in the Victorian period that the cat came to be associated with the “old maid” stereotype, being the “friend of the friendless.” In the early 1900s, anti-suffragette propaganda featured cats to ridicule women as they sought the vote. The notion of the cat lady as an eccentric spinster has long served to belittle women living outside the bounds of traditional gender expectations. Yet today, many women are beginning to unapologetically take up this identity and subvert its history. In this installation, both the artist and the viewer become the cat lady as they step into a mob of felines.

The work also draws from the artist’s interest new age spirituality and mysticism. She creates talismans out of found objects—“low culture” items that act as symbols, ordinary things transformed through artistic intention. The photographs in the installation suggest this interest, while harkening back to the cat lady’s association with witches. The images present the artist herself, a lone figure gathering plants in a field and posing amidst clamorous graffiti. In these cryptic compositions Salcido Whitmore appears wild and strange; she is the witch, the crazy cat lady.  The exhibition’s title, I Rang A Silent Bell, also invokes this uncontrollable nature. The title is a lyric taken from the Grateful Dead song, “China Cat Sunflower,” which features kaleidoscopic, cosmic imagery. “China Cat” references both a type of ceramic and the long tradition of cat figurines that serve as luck talismans in Asian cultures.

The installation also suggests the multilayered term “pussy,” which, like the cat lady, has a long linguistic tradition. The word, as used to describe a cat, originated in the sixteenth century, and in the seventeenth century came to refer to girls or women. “Pussy” was first used to indicate the vagina in the eighteenth century, while later coming to imply weakness. Today, depending on the intention of its usage, the term oscillates between demeaning and empowering, erotic and political. In Salcido Whitmore’s installation, pussies dominate the space as she both humorously embraces and critiques the cultural meaning of her found materials. She transforms the figurines by placing them in the fine art gallery, where they wield power over the viewer with their abundant presence.

The installation is part of a networked exhibition developed by curator Elizabeth Rooklidge through the San Diego-based residency program, After 1920. Over the course of three months and across three different San Diego gallery spaces, Rooklidge will present work exploring women’s desire through the depiction of touch. This larger project includes Salcido Whitmore’s Art Produce installation, a solo exhibition of After 1920 resident Emily Harter’s prints and paintings, and the group exhibition A Show About Touching (July 13 – September 28, 2019) at Bread & Salt Gallery, in which work by Harter and Salcido Whitmore will appear alongside seven other artists.